The Levoit LV-Pur131 Air Purifier is the older sibling to the popular 132 model. It has a sleek, square design in a pure white shade to fit seamlessly into most rooms in homes and offices.

On first glance it has everything an air purifier should have: an HEPA filter, an activated carbon filter and a reasonable price tag. But there are a few little issues to be explored to get a true idea of this machine and what you might experience if you were to own it.

Does the Levoit LV-PUR131 eliminate odors? Does it help with allergies? Are there any faults to be aware of? Who is it suitable for?

====>> In a rush? Click here to see the current price for a Levoit LV-Pur131 Air Purifier on Amazon

What Interesting About The LEVOIT LV-PUR131?

Levoit might have made newer models since the Pur131 (see the Core 300 and Core 200 as examples) but this classic model keeps selling. Why?

The Levoit LV-PUR131 is an attractive machine if you like fresh white colors and sleek lines. It has a horizontal control panel along the top with a digital display screen. 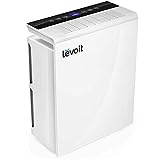 What’s most interesting about this model is the auto mode. Auto modes aren’t exclusive to Levoit, other brands do feature them, but it’s still an interesting aspect to note. What the auto mode does is allow the machine to assess the air quality and change the fan speed accordingly.

This leads us to the air quality indicator which uses different colored lights to tell you how good or bad the quality of the air is. When you select the auto mode you don’t need to pay attention to the air quality indicator as the machine will adjust itself. This is pretty cool as it means that when you cook, clean or smoke the air purifier will kick into high gear and clear all the gunk from the air.

The filtration system is worth mentioning as is it is simple yet very effective. It has a fine mesh pre-filter, a true HEPA filter and an activated carbon filter for hiding those nasty odors. This is all you really need for a thoroughly clean environment at a reasonable cost. There are no fancy lights, ionizers or permanent filters to plague you with worries of ozone, so that’s a great plus.

Is it good to reduce dust and remove tobacco and pet odors or diaper?

Yes, by many customer accounts the Levoit 131 is great at reducing odors. Fire smoke, cigar smoke, cooking smells and “teenager” smells have all been mentioned in positive reviews. This is partly due to the activated carbon filter (designed especially for the purpose of reducing odors) and the auto mode. The auto mode detects smells and particles and cranks the fan speed up to the highest level until the smells die down.

Does it have an ionizer?

Nope, this air purifier does not have an ionizer and it doesn’t produce ozone. This is a major plus for people who stay well away from ozone-producing appliances.

The reviews paint a great picture of this affordable air purifier. 71% make up the 5-star section while the 1-star section gets only 7% of the votes. Let’s figure out what people loved and hated.

Removes odors and refreshes the air: the odor-reducing abilities of this model have been praised many times in the positive review sections. Customers have mentioned that the air in their homes has become noticeably fresher, cleaner and with far less odor. Smoke, food and pet smells are mentioned, which are generally the most pungent odors expected in a home.

Helps with allergy symptoms: many reviewers have raved about the great reduction in allergy symptoms experienced by themselves or family members. Seasonal allergies and sinus issues have been mentioned in reviews written by very happy customers with reduced allergy-related symptoms.

Auto mode works really well: the auto mode has impressed plenty of customers. (This is interesting as other customers have found the auto mode to be a little disappointing). The positive reviews have noted that the auto mode switches to red (“bad” air quality) whenever the users cook and clean.

Won’t turn on: unfortunately, quite a few reviewers in the 1-star section have received a unit which just wouldn’t turn on. Compared to the number of people who didn’t experience this issue I don’t think it should turn you off purchasing this item if you really like the features.

Filters are expensive to change: an interesting complaint in the negative review sections regards the filters. Some people have found that they need to change the filters far more often than they’d expected to, some as often as every month or two. Now, this could either be because the filters were actually dirty, or because the “change filter” light was playing tricks and illuminating when it didn’t need to. Either way, these customers found that the price of the filters was too high to sustain.

It’s really easy to use once you get it all set up. Once you take it out of the box you just need to unwrap the filters, pop them back into the unit, find a flat space with a power cord handy and plug it in.

Operating the unit is really easy, here’s a general rundown of what to expect:

That’s about it, it’s really not a cumbersome machine to own and use.

Well since you can’t manually wash or clean the filters the cleaning required is very minimal. The filters must be changed and cannot be cleaned (or they’ll be ruined and useless).

The only cleaning involved regards the dust sensor and the exterior of the unit. To clean the dust sensor you need a Q-tip soaked in water to give it a quick clean to remove any dust. The unit just needs a wipe down with a damp cloth to keep it nice and shiny.

How Does It  Compare to other models?

The Coway ap-1512hh differs drastically to the Levoit in terms of looks. The Coway is black, square and looks a little like a stereo speaker. However, they’re quite similar in function, features and filtration. Here are the similarities and differences between the models so you can assess which is best for you.

You can buy replacement filters on Amazon for around $30.00 give or take, depending on sales and price changes. They come in a set which includes a true HEPA filter and an activated carbon filter.

The filters should be changed every six months or more often depending on how dirty they get. The change filter light is based on time elapsed as opposed to how dirty the filters actually are, so it’s best to check them regularly.

If you start noticing funny noises, odors and less air flow, check the filters. If they’re grubby or clogged it’s time to change the filters despite whether the air filter change light has come on or not.

It’s really dependent on the level of pollutants in your home. If you’ve got lots of pets, regular cooking and smokers inside then you’ll be looking at a more regular filter change routine.

Not as of now. It’s best to contact the manufacturer if you need a new part or something to be fixed.

The general consensus among customers is that the lowest fan speed is very, very quiet but the higher speeds are more audible. Most people find that even though the higher fan speeds are audible, the sound is not disruptive or annoying. It’s safe to say that this machine is quiet enough for most people’s preferences.

If you need an air purifier below $200.00 with true HEPA filtration, an odor-reducing carbon filter and the choice of auto or manual modes then this is for you. I don’t think you can really go wrong with this model unless you’re unfortunate enough to encounter some of the issues described in the negative reviews. I think it’s worth taking the small risk as chances are you’ll have a great experience and won’t regret the purchase.