Winix Plasmawave 5300 Review: Do the Pros Outweigh the Cons?

Also called the 5300-2, this is one of Winix’s most affordable air purifiers. And for its low price, it really packs a punch.

We’ve done a complete review below, but if you read no further, understand that the Winix 5300-2 with Plasmawave technology is, even compared to much newer competitors, an extremely high-value air purifier. 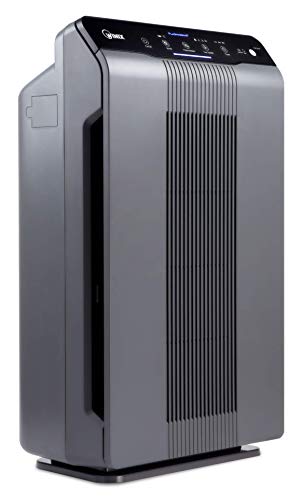 Want all the details? Carry on reading below.

What Interesting about the Winix Plasmawave 5300?

The first two big points I’ve mentioned above. You need to understand how high the room capacity is on the Winix compared to similarly priced purifiers. For example, the Levoit Core 300 – a very well-rated air Levoit model we’ve covered on this site – costs significantly more, but only covers 217sq ft compared to the Winix 5300’s 360sq ft!

For example, if the room is suddenly filled with cooking smells and smoke, the air quality sensor will kick into gear and ramp up the fan speed to “turbo”. The air-quality LED indicator light will change color (to red) when odors and particles are present and will return to green or amber as the air clears.

Next up, the “PlasmaWave technology”. If you’re a Winix newbie, here’s a quick explanation of this feature: the PlasmaWave uses positive and negative ions to create “plasma”, which then combines with water vapor to create Hydroxyls.

These Hydroxyls attack and destroy odor, gas, and bacterial particles which pass through them. If science-y words do nothing for you, all you need to know is that PlasmaWave is designed to destroy gasses, smells, and allergens.

An air purifier that doesn’t reduce dust is, in my opinion, a total waste. Dust is ugly, irritating (literally), and increases the need to clean every surface in the home. The 5300 has a true-HEPA filter that handles microns as small as 0.3, so dust-clearing should be no problem.

What’s more, when using the “auto” mode, the air quality sensor can tell how much dust is circulating in the air and increases the fan speed accordingly. If these features really do what they say “on the box”, then the simple answer would be: yes, it reduces dust.

However, after looking at the cleaning technology, I always look to honest reviewers to assess the dust-collecting abilities. Thankfully, what I found painted a positive picture. Sure, a few people have complained that there were no changes to household dust, but a great number more have been overjoyed with the dust-reducing ability of the 5300. I think we can safely check the “dust” box.

Household mold is a more complicated issue. It breeds in humid environments, so if your home is damp, an air purifier might catch airborne mold spores, but it’s not going to kill the mold at the source. However, a true-HEPA filter (like the one in the 5300) is one of the best tools for catching mold spores.

Mold spores are generally around 1 to 5 microns in size, well within the size-range for a true-HEPA to capture, (they catch particles as small as 0.3 microns).

As for reducing musty, mold-related odors, the PlasmaWave technology, and carbon pre-filter should help.

Going by the reviews, yes, it does a great job of removing tobacco and pet odors (for the majority of customers). This could be due to a mixture of cleaning features: the odor-reducing carbon pre-filter, the true-HEPA filter, the PlasmaWave technology, and the high fan speeds.

A lot of reviewers have found that cigarette smoke and related odors have been greatly reduced, especially when the “auto” mode is on.

Does it Emit Ozone?

There has been confusion in the past as to whether the Winix 5300-2 emits ozone as part of its purification process. Fortunately, anyone can confirm at the EnergyStar website for this model that the ozone emitted, in parts per billion, is 0.0. This air purifier does not emit ozone.

Let’s check out the “pros and cons” of the Winix 5300 PlasmaWave according to happy and unhappy users of this model.

A majority of the reviews lie in the 5-star section, with more in the 4-star section. This isn’t too bad at all. But what I thought was really interested was what people love about this model, as the negative reviews really gave this machine a blasting.

Here are the most common positive reviews:

Reduces allergy symptoms effectively: a very common comment throughout the 5-star section is that the 5300 has significantly reduced the allergy symptoms of customers and their family members. People have said that they require far less allergy pills, they wake up feeling fresh and healthy, and they can finally get a solid night’s sleep.

Customers who are allergic to their pets have also chimed in with positive experiences with the 5300, having noticed that their pets no longer irritate them. High praise indeed.

Reduces odors: there are many reviews stating that litter box odors, cigarette odors, and cooking smells have been heavily reduced by the 5300. What’s more, plenty of reviewers have been really impressed with how the air quality sensor detects even the vaguest of odors and kicks-up the fan speed to remove them very quickly.

Reduces the need for dusting: happy consumers have noticed their need for dusting has been reduced by the 5300. They have found that far less dust settles on their furniture and surfaces, as well as reduced visible dust floating in the air. In turn, less dust helps to reduce dust-related allergy symptoms. Win, win.

Now, I found the reviews for this model very interesting indeed. Some of the very negative reviews (in the 1 and 2-star sections) offered some head-scratching thoughts. Some people found this machine to be utterly useless, unsafe due to ozone (which we clarified above doesn’t exist), badly constructed, and even… too loud.

Here are the most common negative comments:

The 5300 is simply is not effective: a few unhappy reviewers have found that the 5300 just doesn’t… do anything. They haven’t noticed a difference in dust, allergies or odors.

Dies after a few months: the 1-star section is littered with comments about the 5300 simply breaking down and ceasing to work after a few months of operation. Some people found that power outages or even changing the filters caused the machine to refuse to work.

Annoying clicking noise/too loud: an interesting complaint in the 1 and 2-star sections is that strange and annoying noises emit from the 5300. It seems to be the PlasmaWave that is causing the annoying “clicking” noise bugging so many users, as well as a high-pitched whine. Others have said that the entire operation is simply too loud, even on the lowest settings.

I find this to be very curious considering that so many people in the “happy” section have said they can barely hear the machine when run on the lowest settings.

It’s very easy to set up and maintain. When you first take the unit out of the box, make sure all of the plastic coverings on the filters are removed and discarded. Place the filters back into the machine and make sure they’re secured properly.

Find a good spot for the unit, ensuring that there are no TVs, radios or microwaves within 7 feet (the waves can mess with the PlasmaWave technology). There should be a decent amount of clear space around all sides of the filter for the best effect.

Experiment with the control panel and find out which mode and speed work for you.

Keep an eye out for the “replace filter” light so you make sure you stay on top of the true-HEPA filter replacements.

Is it easy to clean?

Since you don’t need to clean the filters, yes, it is very easy to clean as the exterior does take much maintenance to stay fresh and tidy-looking.

The brush attachment on your vacuum cleaner is a great tool to use to clean the outside of the machine, as it gets into the grilles on the front. A damp cloth also works a charm.

The 9500 has a far higher price point. The 9500 has 5-stage cleaning: washable pre-filter, true-HEPA filter, CleanCel anti-bacterial treatment, washable Advanced Granular carbon filter, and the PlasmaWave. The 9500 has a remote control and a timer feature, neither of which the 5300 has. The 9500 covers 284 square feet, (which is less than the 5300), and it is almost 4 pounds heavier.

It’s best to buy the replacement filters from the Winix website, as you know you’re getting the real deal. The pack you need is the “A 115155” filter pack. It has four carbon pre-filters and one true-HEPA filter. This pack will last you for one year.

This is a replace-only machine. There are no washable filters, and they must be replaced in order for the air purifier to remain effective.

True-HEPA filter = change whenever the light comes on. NOT washable.

You are looking at replacing a total of 4 filters a year, but you can get a bundle from Winix with all 4 filters inside (as mentioned above).

Although there are mixed reviews regarding the volume of this model, I think it’s safe to say that the lowest speed levels (1 and 2) are very quiet according to most people’s standards. Level 3 and the “turbo” level are louder, but they do move more air. Some people have complained that the PlasmaWave is loud. Winix do address this by saying that sometimes, when particles move through the PlasmaWave, they make a “chirping” noise.

Verdict: Is This Air Purifier For You?

This is a good air purifier…with some hurdles to consider. If you are going to take bad reviews into account, as well as good ones, you might be put off by the slight chance of receiving a “dud” machine which might cease to work. You might also be worried by the mention of ozone and irritating noises.

However, I do think that the pros do outweigh the cons if you are looking for these features:

If you have no interest in PlasmaWave and auto-mode and you’d really rather a model with nothing resembling an ionizer, I would suggest you try another model. A good alternative could be the Honeywell HPA300. This air purifier is great for large rooms and it has true-HEPA filtration, 4 fan speeds, and a timer. It has a similar cleaning process in terms of filtration but without any PlasmaWave-esque features.

2 thoughts on “Winix Plasmawave 5300 Review: Do the Pros Outweigh the Cons?”